Betta fish, also known as Siamese Fighting fish, is one of the easiest types of fish to care for. They are popular also because they have beautiful bold colors and graceful, flowing fins and tail, especially in the males of the species. Unfortunately, betta fish have been the victims of their beauty and the relative ease of betta fish care and are often are mistreated through misconceptions and ignorance.

History has it that centuries ago in Asia, children started collecting these colorful fish from the rice paddies to keep as pets. As kids began placing them together for sparring matches, their popularity grew. Eventually, the King of Siam got involved, deciding not only to collect them himself but also to regulate and tax betta fish.

The first betta fish arrived in the United States around 1910, having found a debut in Europe some twenty years earlier.

How Are Betta Fish Different From Other Fish? 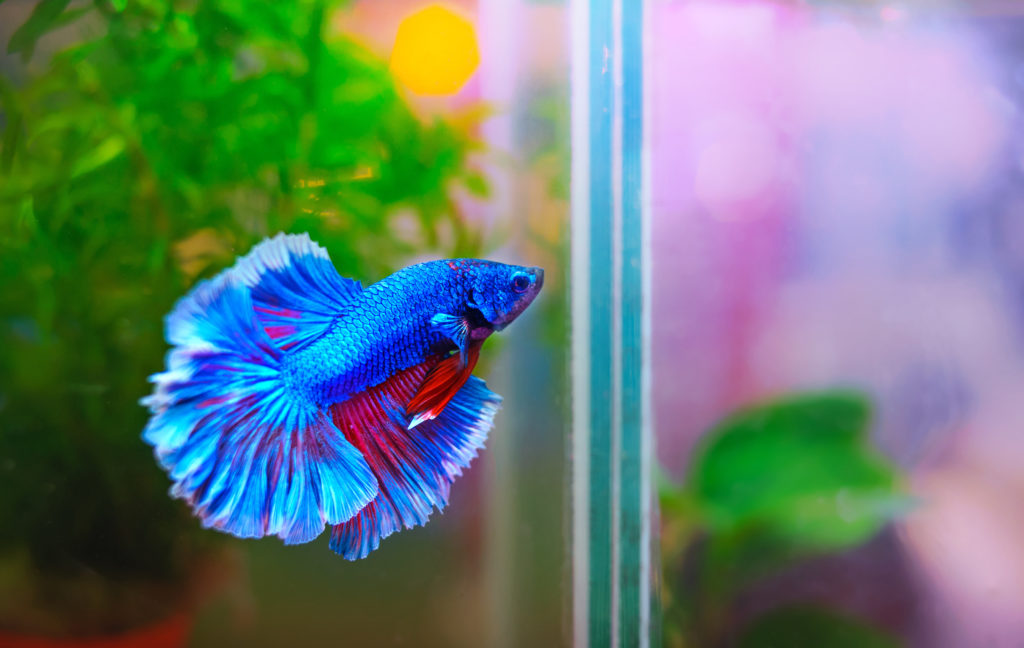 Bettas are members of the gourami family. They are known to be highly territorial. This and the fact that they originate in Thailand cause them to be known as Siamese Fighting fish. (They are also found in Cambodia and Vietnam.)

The bright blue, purple, or red flowing-tailed fish that catches one’s eye at pet stores is usually the male of the variety called the Veiltail betta.

What many people don’t know is these fish (Betta splendens) have a closely related cousin, sometimes called the Peaceful betta (Betta imbellis), also known as the Crescent betta for its rounded tailfins.

Properly cared for, a betta in captivity usually can live for an average of three years, but when exceptionally taken care of, a betta fish life span can be as long as 4 or 5 years. Take into consideration that male bettas are usually sold at around a year old and female bettas at about six months.

Can Betta Fish Live With Other Fish?

Because they are usually in containers by themselves before they are sold, people often mistakenly get the impression betta fish cannot cohabitate with other fish. While two or more male bettas will fight each other in the same tank, female bettas can live together or with a male betta. Sometimes, a betta can even fit in with a community aquarium with other types of fish. Here’s a handy guide to which fish you can pair your betta with.

Do Betta Fish Need a Filter?

While you can keep bettas without a filter, like any fish, they will do better with stable water environments such as those provided by a filter. Having a filter helps to keep the water clean and neutralizes ammonia and nitrates. You will find that having your betta in a filtered tank will take less maintenance, which makes it easier to care well for your betta.

How Do I Keep My Betta’s Water Safe?

Besides having a filter, you should provide sufficient room for your betta to move around in. Although you will see bettas at pet shops surviving in as little as a pint of water in cramped containers, don’t plan to keep your new acquisition in a tiny betta bowl. Instead, look for a betta fish tank size of two and a half gallons or larger.

In addition, you will want to purchase a good water conditioner. To be able to use tap water for your new fish (or any time you change the water), you must first put a few drops into your betta fish water precisely as prescribed on the product label. See a list of 10 of the best water conditioners for your betta.

Many pet shops will happily test your water for free. Just ask.

For your fish to be comfortable, the betta water should stay between 75 and 82o Fahrenheit. Aquarium thermometers are inexpensive and can be bought for the outside or inside of your fish’s home. If your aquarium is in a room that varies significantly in temperature, you will know if you need to buy a heater to keep your betta comfortable.

What Else Should I Know About Betta Care?

When learning how to care for betta fish, you may be told to feed them twice a day. If that is convenient, it’s fine, but they can also do well with just one feeding a day, and even can survive skipping a day now and then.

They should only eat as much as they can eat in five minutes. It’s suggested that the amount of food a betta should eat in a day is roughly the size of his eyeball. You can read more about feeding and setting up the tank here.

You can feed your betta a good quality betta fish food like Hikari Bio-Gold Betta Fish Food, which is easy to measure out as it is formulated in small, round pellets, or Tetra BettaMin Tropical Medley Color Enhancing Fish Food.

For a second feeding, you can occasionally skip the regular food and offer your betta fish a treat, such as Tetra BloodWorms Freeze-Dried Freshwater & Saltwater Fish Food or freeze-dried brine shrimp. Be sure to scoop out any food that remains in the water after 5 minutes so that the water does not become cloudy, and feed less the next time.

If you want to know how to set up a betta fish care in a bowl, be sure to get the largest bowl you can find. Do not make the mistake of blocking the surface of a betta fish bowl with any decorative plant like a peace lily, which was the trend in the 1990s. An acrylic betta fish bowl may be lighter weight than glass, but they often appear fogged up after a while.

If you are diligent in pursuing how to take care of a betta fish , you will find you have a piscine friend for several years on end.