Cats are notorious for their shifting moods, being your best friend one moment and twitching and hissing the next. We’re used to dogs’ consistent affection, but cats are more specific with their behavior. Some would call it erratic and devilish, but if a cat bites you at your first encounter, there’s normally some context surrounding their actions. A cat sitting down can mean so much more than an owner may think.

Understanding your cat is attainable, and learning cat body language is pretty simple! With a little effort, any cat owner can become an expert on cat behavior.

Reading body language seems complicated, but it’s as easy as following your instinct. It’s not difficult noticing when cats are anxious or fearful, happy, or relaxed. The best way to measure their moods is by observing their most active movements and expressions.

Eyes are windows to the soul, and this stands for all cat behavior. Here are some moods to identify from their eye expressions:

This is where it gets tricky. The cat’s ears require more context to determine a cat’s behavior.

Surprisingly, there’s not much to tell from a cat’s whiskers. What can be deduced is that a scared cat will bring its whiskers towards its face, making themselves smaller. Meanwhile, if a cat is happy, they’ll have their whiskers forward.

A cat’s tail can be seen as a mood barometer with the posture being indicative of either a calm or mean cat. These cat tail meanings are the most physically visible aspects of behavior.

What Does Their Body Posture Mean? 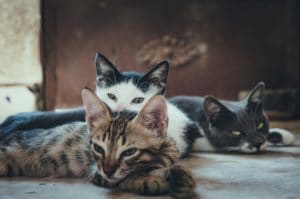 Ultimately, a cat’s body shape and posture are what typically determine their moods and behaviors. However, there’s still a matter of understanding the context and the ambiguity of some positions. 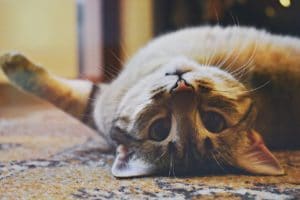 Cats experience general anxiety much like humans, so it may be possible that you’ll need more than merely an understanding of body language. The following may be helpful when dealing with an anxious cat:

If none of these work, consider taking them to the veterinarian or a certified cat consultant.

Cats are lovely companions and not as high maintenance as most people think. They’re soft, cuddly, and full of love. However, they don’t come with open invitations to pet them and require some context to understand their needs. With effort, cat body language and behavior isn’t an impossible feat.

It's safe to say most iguanas are Caribbean.🌴

Secrets to stop your cat from scratching furniture

Don't get it twisted; this human is my pet!

Read this if you want to overcome your cat's anxie

Got to love hamsters 🐹

Want a new pet? Get a Guinea pig!

Is this chicken I smell, human?