Terriers are a particular group and class of dogs initially bred to dig and hunt for prey like moles, foxes, badgers, and rodents. Their name dawns in the Latin word ‘terra’ (earth) – although some people swear that the word terrier actually comes from the word terror – not real.

Terrier breeds come in many sizes and shapes. Still, they share similar personalities. They are feisty, mischievous, and active creatures. Terriers are very intelligent and trainable and make great pets for patient people with a great sense of humor.

If you’re looking to adopt (or buy) a terrier dog, it pays to do some research. To make it easier for you to find your new furry friend, we’ve put together a broad list of the most popular terrier dog breeds out there.

Get familiar with each terrier dog breed. Learn more about their history, characteristics, temperament, joint conditions, and lots of other cool facts.

If you’ve ever seen one of these dogs, consider yourself lucky. The Airedale Terrier is the largest terrier breed not only on this list but of all terriers. The species is towering and sturdy with an athletic body and covered in a thick, coarse fur coat.

The American Staffordshire Terrier (Amstaff) is another impressively muscular and energetic medium-sized terrier breed. This breed features a short silky coat and is intensely loyal and brave.

The Australian Terrier (Aussie) lies at the other end of the spectrum. It’s one of the tiniest terrier breeds. Don’t let its size fool you; this breed is sturdy, short-legged, and has a long-drawn head with erect ears and darkish brown eyes.

The Border Terrier is a small, rugged, courageous dog that enjoys hunting and digging. Despite its primitive characteristics, this breed is good-natured, spirited, intelligent, and loyal.

The Boston Terrier is an American kind of domesticated terrier dog. This breed ranges from small to medium-sized and is usually muscular and heavy-set in appearance, much like the English terrier breeds.

The Bull Terrier is a thick and robust dog, headstrong and independent in nature, but incredibly loyal to its owners.

The Cairn Terrier is one of the oldest breeds ever to emerge. This small terrier is originally from the Scottish Islands, where it was initially bred as a working dog.

This medium-sized dog is also one of the oldest breeds of Terrier. The handsome Irish bearded dog is spirited and adaptable, fitting for life in the countryside and the city.

The Jack Russell breed is a small yet highly spirited trained dog of the terrier family. Compact, muscular, and energetic, Jack Russell is known as the little dog with a big attitude.

The Miniature Bull Terrier is also a small but powerful little dog. Exclusively bred from the Bull Terrier’s smaller breeds, the miniature version is almost indistinguishable in its appearance and personality. 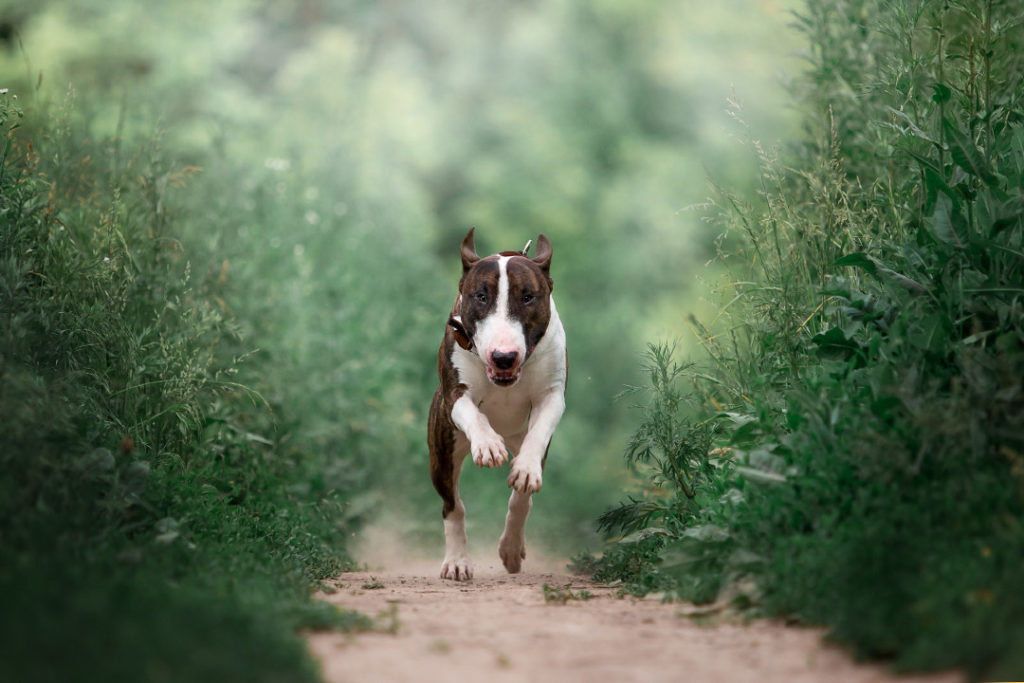 The Pit Bull Terrier is a sturdy, loyal, and active medium-sized domesticated Terrier breed with short hair and a stout, brawny build.

The Scottish Terrier is another one of those small and sturdy breeds of a trained dog. High-spirited, wildly independent, stubborn, and whimsical, the Scottish Terrier was bred from many Old Highland Terrier breeds several centuries ago.

The Staffordshire Bull Terrier (English Staffy) is an English terrier. The English Staffy was initially bred from the English Bulldog and Old English Terrier breeds. A very muscular and loyal dog, the Staffy makes a great addition to any home – even one with children.

The Welsh Terrier (Welshie) is a small-medium dog similar to the Airedale Terrier in appearance. Some claim it to be the oldest breed native to the United Kingdom.

The West Highland White Terrier (affectionately known as the Westie) is a small-sized terrier breed originating in Scotland, developed to hunt rodents.

Named after its place of origin in Yorkshire, in Northern England, the Yorkshire Terrier (Yorkie) is one of the smallest breeds on this list. This particular group is known for its flowing, silky coat.

Terrier dog breeds range in sizes, small to large. Some species have flowing coats, while others not so much. With so many distinct varieties of terriers to choose from, you should have no trouble finding that one furry friend. Whether you want a small terrier you can carry around with you everywhere or a big one who loves to play, you’ll find all the information you need in our list above.