Reasons Why Your Dog May Be Howling

Why Do Dogs Howl?

If you’re a dog lover, maybe you’ve seen the animal meme circulating of the “American Howling Retriever.” It’s a picture of a curled-up coyote, with a caption that reads, “The American Howling Retriever is a breed of dog with extremely coyote-like features. In fact, the only difference between it and a common coyote is my refusal to ever admit I’ve made a mistake and all the Benadryl I keep giving it so it won’t maul me.”

You (hopefully) aren’t keeping a wild coyote as a pet, but if you have a howling dog at home, then you might feel like the joke is a little too relatable. The good news is, there are many reasons why dogs howl, and the answer is rarely because they’re coyotes. While some of the reasons dogs howl are related to their wild ancestry, others may be simple attempts to communicate with you.

Why Does My Dog Whine? 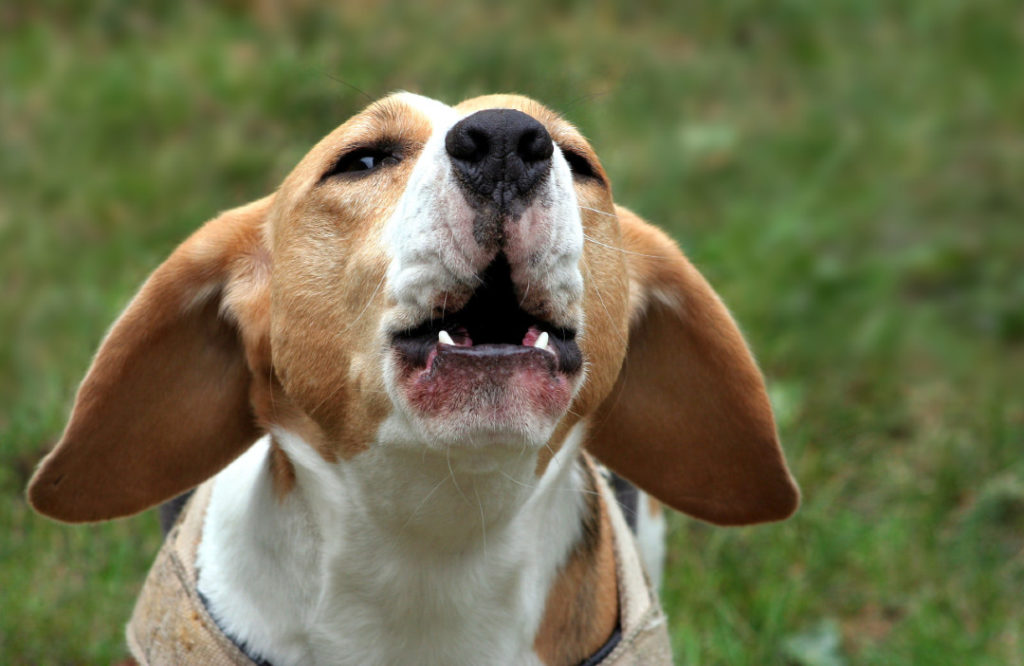 The first step in deciphering what your dog is trying to say is to differentiate between the varying noises that a dog makes. While the term “whine” and “howl” might be used interchangeably by humans, they can mean very different things for a dog.

A dog’s whine is a higher-pitched note in a dog’s register, often held for an extended time. The length of the whine is what makes it easily mistakable for a howl. Oftentimes, puppy howling might really be an attempt at whining, which is a way for them to express that they need or want something.

When paired with body language like crouching, a whine may express that a dog is in pain or anxious. However, puppies may also be whining to be let outside, be played with, or be fed. When asking why dogs cry, first look for signs that their basic needs, like food, water, a bathroom break, or attention, are not being met. They may be trying to tell you that something is missing.

If your dog is a frequent howler, the first question to ask yourself is if they are in pain. If their howl is bordering on a high-pitched whine, or if it has a shrieking quality to it, then you should visit a veterinarian to rule out sickness or injury. Other symptoms that might accompany a dog howling from pain could be:

If you’ve ruled all those out, then there are many other reasons why your dog could be howling. 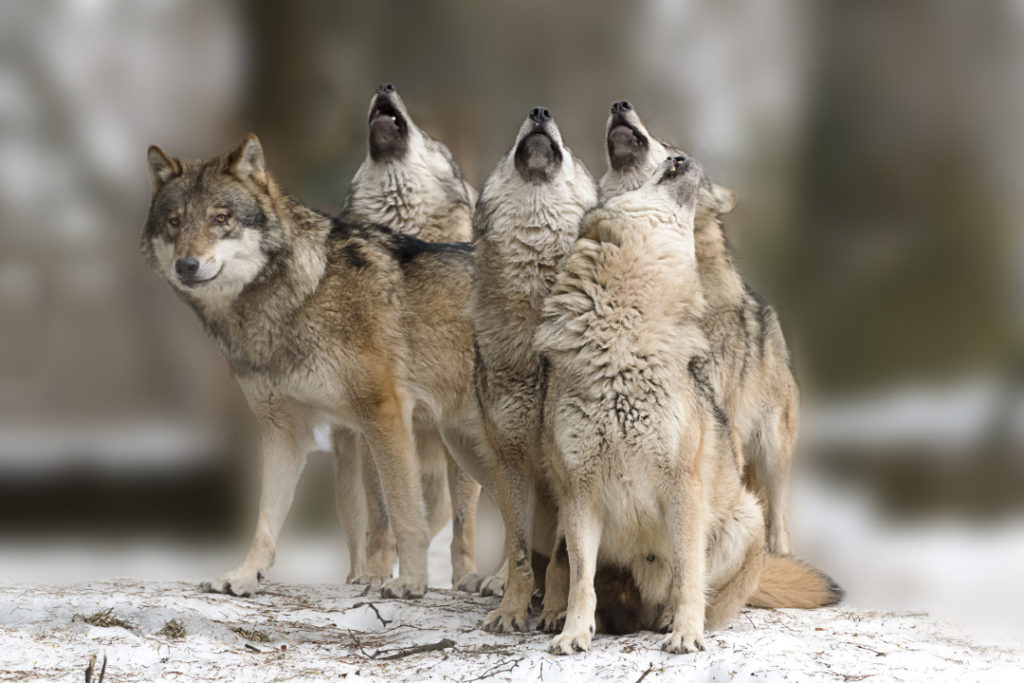 To understand howling dogs, we first must understand their evolutionary ancestors: wolves. A wolf’s territory is traditionally vast and densely forested. Long sustained howls are a more surefire way to communicate with far-off pack members than a short bark. Wolf packs commonly howl to communicate their location, as a kind of all-natural “GPS.” They also might howl to share the location of prey or signal a threat to their territory. Wolves have even been known to engage in daily “chorus howls” together to strengthen their pack bond.

Wolves howl for many reasons, but not at the full moon. Scientists now believe that ancient humans were more likely to be active on brightly-lit, full moon nights. Because they were outside, humans simply observed wolves more on these nights and took more notice of their howling.

Like their wild ancestors, dogs most often howl in response to other dogs. Dogs are genetically hard-wired to respond to long, sustained noises because they were once signals coming from another member of the pack or a rival wolf gang.

Why Do Dogs Howl at Sirens?

Not all dogs howl along when a siren passes, but you might have noticed that your dog does. Dogs can hear twice as many frequencies as humans can and hear sounds from about four times farther away than we do. With how loud sirens can be, even for human ears, you might be worried that your dog is howling out of pain. However, veterinarians believe that unless your dog is also tucking their tail and running away from the sound of a siren, then it likely isn’t hurting their ears.

If the noise isn’t too loud, then why are they howling at it? The answer to this is likely found in that same genetic wolf-pack response. A dog might think that a siren wail is a howl from another wolf pack, trying to communicate something to them. Some animal behaviorists have noticed that dogs who feel more secure in their territory don’t howl back at passing sirens. They may not feel the need to answer the call. 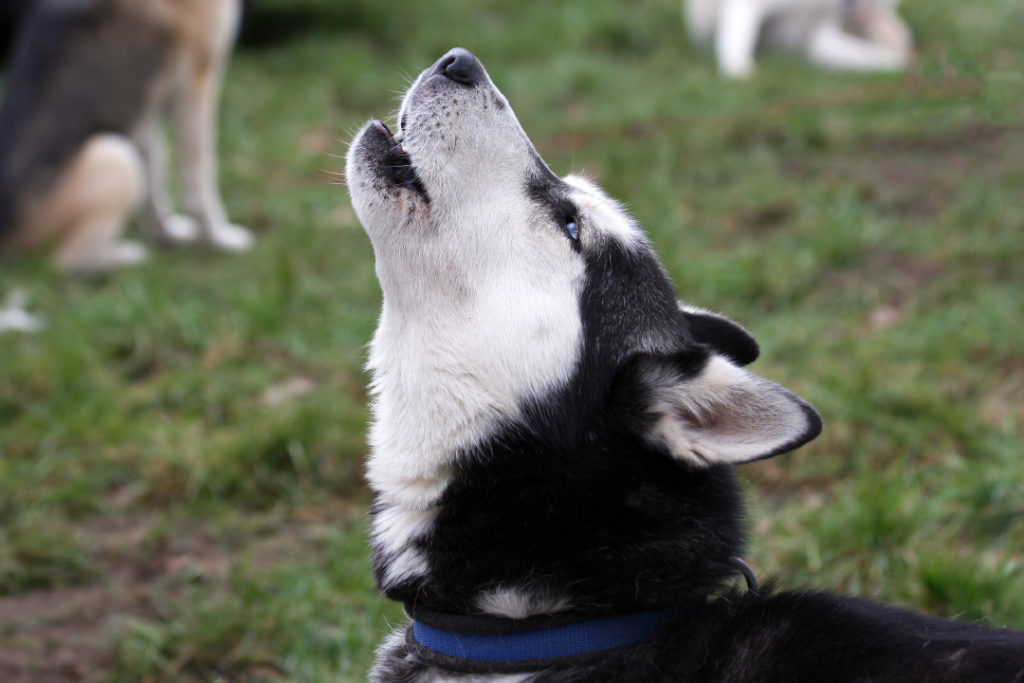 The husky is one dog breed that’s particularly known for its howl. Huskies, Alaskan malamutes, American Eskimo dogs, and certain hounds like dachshunds and beagles are among the likeliest dog breeds to communicate via howl since they’re genetically very close to their lupine ancestors.

While a dog howl is often a pack response, it can also be personal. Hounds, in particular, are often trained to communicate with howls during a hunt. Hounds, and other dogs, may howl to alert others to a discovery that they’ve made. Similarly, a dog might howl when they’re feeling lonely, to get attention, or even to express joy.

A dog howling can be an eerie, sometimes unsettling noise, but it’s often just another method of canine communication. The howl of a dog is often a kind of community organizing, passed down from their wild ancestors. You may notice that your dog howls in response to other dogs, sirens, and your comings and goings. They can also howl to express their findings or feelings. Getting closer with your dog will help you read their cues and respond. If you’ve ever wished your dog could talk, listening to their howling might be the key to unlocking what they have to say.