Why Is Your Cat Sneezing? Symptoms and Treatments for Cat Colds

There are few things more endearing than a little kitty achoo. We’ve never known a cat to sneeze like the horn of an oncoming freight train after all, although that’d be pretty hilarious.

Less funny is when your cat can’t stop sneezing. Is she OK? Why is my cat sneezing so much, and should I be concerned?

A cat sneezing fit shouldn’t be a constant occurrence, but it isn’t uncommon. Like humans, their noses are irritated by foreign objects and allergens. Here’s how to know when you should start taking cat sneezing seriously, and when you can just look on and say aww.

Reasons Why a Cat Is Sneezing

Cats: they’re just like us! They sneeze reflexively for the same reasons, and many of the same solutions apply.

Do Cats Get Colds? 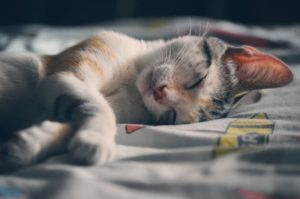 Yes, they certainly can. “My cat has a cold” is a valid concern, and one of the symptoms is sneezing.

But they cannot catch one from humans, so that’s not a concern. You can’t transfer germs to your cat by letting them sleep next to you when you’ve come down with something. You could sneeze into their face like a toddler, and all that would happen is they’d be angry. Likewise, your sneezing cat won’t spread any germs to you even if they are a little sick.

If a cat has a cold, it either:

Cat colds are technically referred to as viral upper respiratory infections, which sounds much scarier than “a cold.” While looking into your cat’s sneezing, you may be spurred into action that’s ultimately unnecessary.

Respiratory infections caused by a feline calicivirus, for example, have no established treatment plan. Like the common cold, the virus must run its course while the patient gets plenty of rest, continues to eat, and keeps up the water intake.

If My Cat Keeps Sneezing, Does It Have a Cold?

A cat sneezing a lot over an extended period of time is one tip-off. Upper respiratory infections in cats usually last one to three weeks. Sneezing will likely be accompanied by:

But remember, a cold in itself — even when it is properly called a feline upper respiratory infection — is not cause for alarm UNLESS:

How to Treat a Cat Cold 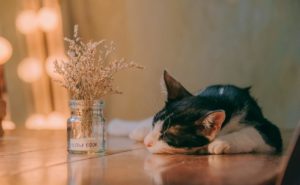 In one of the more troubling scenarios cited above, a vet can prescribe antibiotics, administer an IV, run some tests. As we also mentioned, however, some mild upper respiratory infections won’t necessarily benefit from antibiotics and the like.

For humans and cats alike, the best we can do for a common cold is to treat the symptoms, not the root cause.

If that’s all your cat is doing differently, wait at least a few days to monitor frequency. Sneezing, in itself, is no big deal. It just requires a little examination of the cause and then an adjustment to accommodate kitty.

If it keeps happening, your cat may have a cold, but even that’s usually a run of the mill problem that will work itself out.

True causes for concern are the same as ever: dehydration, not eating, not moving, and too much discharge that isn’t clear. These are not regular cat cold symptoms (such as watery eyes and runny nose) and require a trip to the vet ASAP.

Otherwise, just keep your cats home from kitty school, and let them rest it off.