How to Handle an Aggressive Cat

You’re sharing a room with your cat, maybe playing with them, or perhaps peacefully minding your own business, when suddenly wham! Out of nowhere – cat attack!

Living with an aggressive cat can be difficult and sometimes even dangerous. Cats have five separate sharp areas that they can attack with, from claws to teeth, and are notoriously difficult to discipline. If your cat is acting out aggressively, don’t despair – there are several steps you can take to modify or curb their behavior. The better you get at recognizing and labeling their aggressive behaviors, the more likely you are to find a solution.

The sinister, reptilian sound of cats hissing is often mistaken as a sign of feline aggression. Actually, the opposite is true. A hissing cat is on the defensive, trying to signal that they need space. A cat hiss is similar to a rattlesnake’s rattle. If you back off and leave them alone, the situation should deescalate.

No one wants their pet to be scared or overwhelmed, and you may be tempted to try to comfort your cat when they hiss. Experts say don’t do it. Your cat needs their own space to feel secure. It’s best to back off and let a hissing cat hide if they want to. Don’t stare at them, and give them plenty of time to calm down. When they do resurface, you may offer them treats, catnip, or a beloved toy as a gesture of goodwill. Try approaching them from the side to seem less threatening.

Rescued kittens or cats are most likely to hiss, especially in the early days of being at a shelter. If your ordinarily friendly cat starts hissing at you, especially when being petted, then they should see a veterinarian, as they may be in pain. However, don’t be surprised if your other cat starts hissing at them after they return – vet visits are a common cause for inter-feline hissing. When one cat smells differently (like after a car ride or vet’s office), the other cat may hiss at it as a warning.

Finally, a cat may hiss when it’s stressed. Some kittens will hiss when playtime goes too far or roughhousing gets too intense. As long as they have a clean bill of health, try leaving them alone and keeping strangers, other animals, and children away from them for a while.

There are many different kinds of biting cats, but they often share similarities at the moment before they lunge. While a cat’s warning signs are often more subtle than a dog’s, there are certain body language signals that you can take note of. Some common signs of angry cats are:

Often, declawed cats will bite more frequently since their first line of defense has been taken away from them.

Why Do Cats Bite?

As kittens, cats learn the boundaries of rough play from their mother and their siblings. Cats who were weaned too young may not know when to sheath their claws or not to ambush their owners. This kind of play aggression can be handled in a number of ways. 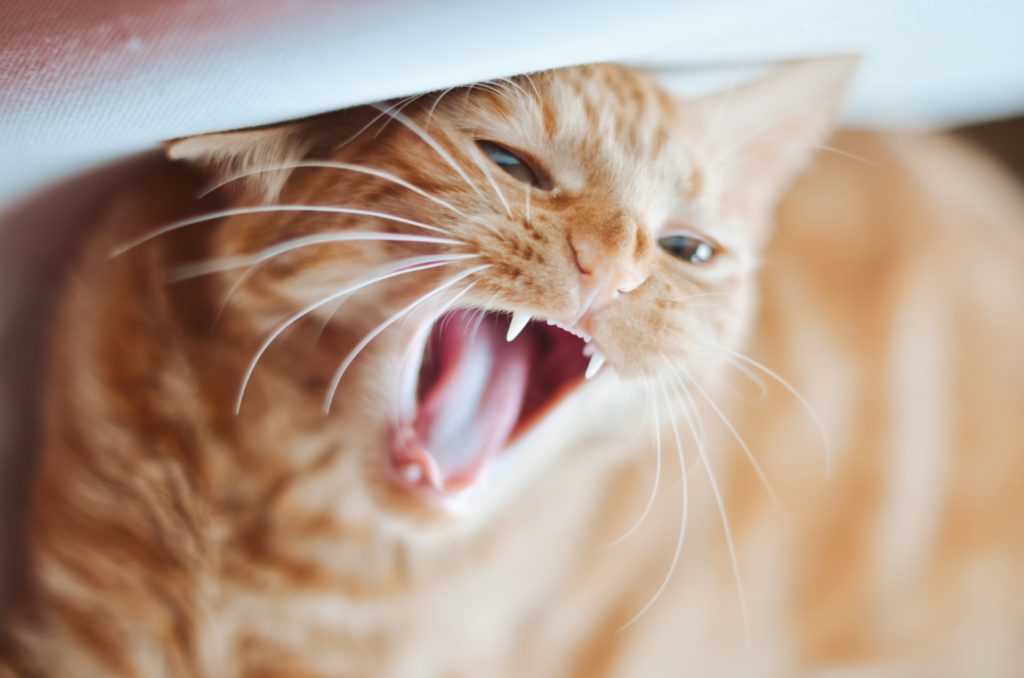 Other Kinds of Cat Aggression

Sometimes, a cat may suddenly bite or lash out when they are being petted if they decide they want space. Monitor children carefully around cats, as cats can decide they’ve had enough very quickly. Creating an enriching environment for your cat with their own bed and toys can help them have their own space to go to and cool down.

Just like people, cats can take out their energy and emotions on innocent bystanders. A cat who is interrupted during a predatory activity like stalking birds, being pulled out of a fight, or who has been recently frightened may suddenly attack “out of nowhere” the next person they see.

With a cat, angry behavior can be cute one second and alarming the next. It’s best to give an aggressive cat some space and get them checked by a veterinarian once they’ve cooled down. Remember, cats need their boundaries respected, just as you need yours. With time, patience, and positive reinforcement, you and your cat can meet each other in a place where you both feel safe, appreciated, and loved.